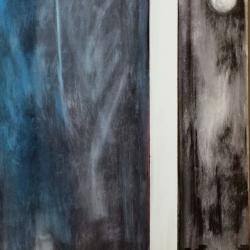 Unitarian Universalist’s painting is part of a series on climate change and air quality issues. 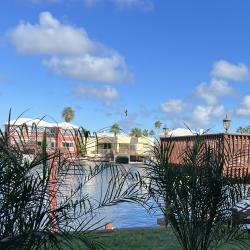 Have moved from Salt Lake City, Utah to Corpus Christi, Texas. House in on North Padre Island with Laguna Madre waterfront. Have bought a kayak and hope to be inspired by this more tropical setting after having lived for years in the very arid Southwest.

Bill Reed has spent much of his adult life immersed in art.

“I love to go and visit art galleries all over the world,” he said.

As the current president of the art co-op, Local Colors of Utah, Reed has had the opportunity to spend even more time in his favorite habitat: the art gallery.

Although Local Colors of Utah now occupies a modest yet surprisingly expansive space at 1054 E. 2100 South, the gallery, which showcases the art of the 10 co-op members, started out in Trolley Square. After the mass shooting there in February 2007, ownership changed and the rents were raised. The gallery moved across the street to a large house, repurposed for commercial use, which is now the home of the Purring Buddha.

After about a year in that location, it was decided that the co-op would call Sugar House its home. Though he was not yet involved with the co-op, Reed thinks that the decision was motivated by the potential increase in foot traffic outside of the storefront. Moreover, the property owner has kept rents at a reasonable price. His mother, who he inherited the property from, wanted artists in the building, and her son has honored this wish. In addition to Local Colors, there are several art studios around the corner. For the past 10 years, Local Colors has enjoyed being a part of Sugar House’s artistic community.

Reed, a former hydrologist who rediscovered his love of painting after he retired in 2005, became involved with the co-op four years ago. His large, abstract paintings stand out in the gallery, both because of their size and their singular style. He often paints with found objects, scouring Home Depot for new materials. Throughout his years as a painter, he has cultivated a style which he says is all his own, following a methodology which is at once meticulous and flow-based, leaving room for happy accidents while still maintaining careful control of the process.

While serving as president of the co-op entails taking on more responsibility than other co-op members, it does not necessarily mean that Reed occupies a position of power. “We’re all equals,” Reed said. “We’re a democracy…we vote on all decisions. All ideas that come up, we vote on.”

For instance, when Local Colors was forced to shut down for a month and a half due to the COVID pandemic, the co-op members took advantage of the closure to repaint the gallery. This meant voting on a color. They settled on a stark white. And when it was suggested that the hanging system be updated, each member cast a vote on what system should be installed. Such voting takes place at monthly meetings. Additionally, each member is expected to work at the front desk or to buy out their shifts.

The egalitarian business model extends to the gallery space itself. Not only do they feature a different artist every month, all paintings are rotated on a monthly basis.

“Everybody gets a chance at being everywhere in the gallery,” Reed said.

Reed said that this business model is ideal for artists, and that, at least under his leadership, the practice of voting on every decision has not seemed to hinder progress or interfere with the gallery’s operation. He said that he’s surprised that there are not more art co-ops, but quipped, “Well, you do have to work with other artists.”

Jokes aside, Reed noted that creating a cohesive gallery experience with the work of so many artists can be challenging. Abstract works like Reed’s and Rebecca Harding’s hang side by side with the photo-realistic work of Mary Jenkins. Neena Plant’s pottery is displayed on tables beneath Adam Hoffman’s digitally produced fractals. Loiranne Chure’s jewelry stands facing Jeff Clay’s travel photography.

The mingling of diverse artistic styles and perspectives is part of what gives Local Colors of Utah its charm. Reed said that the co-op model allows for a level of creative freedom which is hard to come by in most galleries. “Once you’re juried in, you're pretty much allowed to do what you want.”

The pandemic has not been easy on the gallery, and they’ve been compelled to cut costs wherever possible. “Because we are a co-op, we don’t have employees. Therefore we couldn’t legally apply for the loans they were handing out to small businesses,” Reed said. “We had to stay open on our own.”

The co-op’s membership has shrunk in response. “We would like to be at 15 members and we’re about at 10 right now.”

But Reed is optimistic for the gallery’s future. Praising the gallery for its “layout, the interaction with other artists, the fact that it’s a co-op, the fact that everything seems to be fair,” Reed expressed hope for the gallery going forward. He would like to see the gallery thrive the way it was pre-COVID. “Right before COVID was our best year ever at this location,” he said.

Recently, the gallery has opened its walls for guest artists, in hopes that up-and-coming artists can gain exposure to the public. “We wanted to give opportunity to artists who aren’t well established, who are trying a gallery scene out for the first time, or who just don’t have the time to work shifts or the money to be a member,” Reed said. “[Local Colors] is a good place to start and develop a reputation for yourself.”

Of course, they hope to grow their membership in the near future, as things slowly return to normal. However, Reed said that what he wants most for the gallery is to “see everyone achieve their goals,” artistically, professionally and personally.

For more information, visit www.localcolorsart.com/. For more information on Reed’s work, visit billreedabstractart.com/. The gallery is also featured in the Sugar House Art Walk, which is starting up again and typically takes place the second Friday of every month. 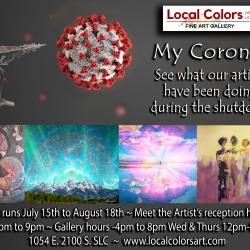 This event is now hung at Local Colors of Utah Art Gallery. Come check out what we have been doing during the pandemic. 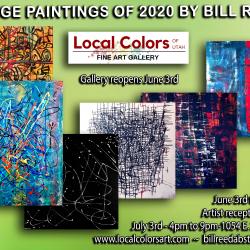 “Large Paintings of 2020 by Bill Reed”
Local Colors of Utah Art Gallery presents a new exhibit entitled “Large Paintings of 2020 by Bill Reed” This show features several  large abstracts painted in the Spring of this year. These works by local artist Bill Reed illustrate a diversity of process and emotions, and reflect 15 plus consecutive years of renewed passion for painting. “Internal Monologue: Highway of Color” captures the wordless inter-working of the artists mind. “Budapest”, “Vienna”, “Passau”, and “Vines on a Wall in Autumn” were all inspired by a river trip taken by the artist across Europe last Fall. “Static Motion” is complex yet simple in its execution. “Aerial Ballet” is minimalist yet playful. “Inferno” is raw energy. “Joyful Jazz” is a visual expression of sounds, and “I like to Ride My Bicycle” is a shout out to spring like bike weather.  “Physical Distancing is Killing Me” is a subtle reminder of life during the pandemic. “Whirlwind” vibrates with the frustration of isolation. Enjoy the debut these new works!

Exhibit opens June 3rd with an evening reception on July 3rd and runs through July 14th. 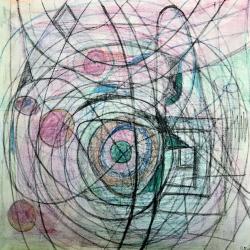 Physical Distancing Is Killing Me by Bill Reed along with write-up in paper. Here is the online version of the Tribune’s “virtual art gallery”: https://www.sltrib.com/artsliving/utah-artists-coronavirus/

"The most striking thing about it, I think, is the variety of styles and viewpoints of the 21 works we included."  by Sean Means, arts and culture reporter, The Salt Lake Tribune 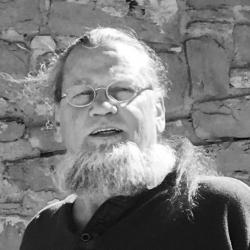 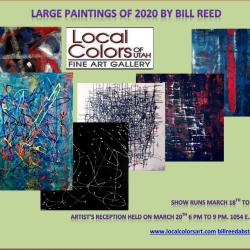 Join me on June 15th 2020 to see 6 new painting of 2020. Hopefully we can open after this coronavirus pandemic has past. 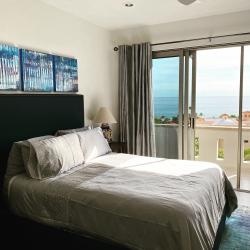 The Pando Triptych now has a home in Mexico with a beautiful view.

September 2019: This wonderful triptych sold shortly after its first showing and will have a new home at the tip of Mexico's Baja California.

The painting is named after Pando, aka the trembling giant, the largest living organism, one hugh network of Aspens in Fishlake National Forest, Utah.